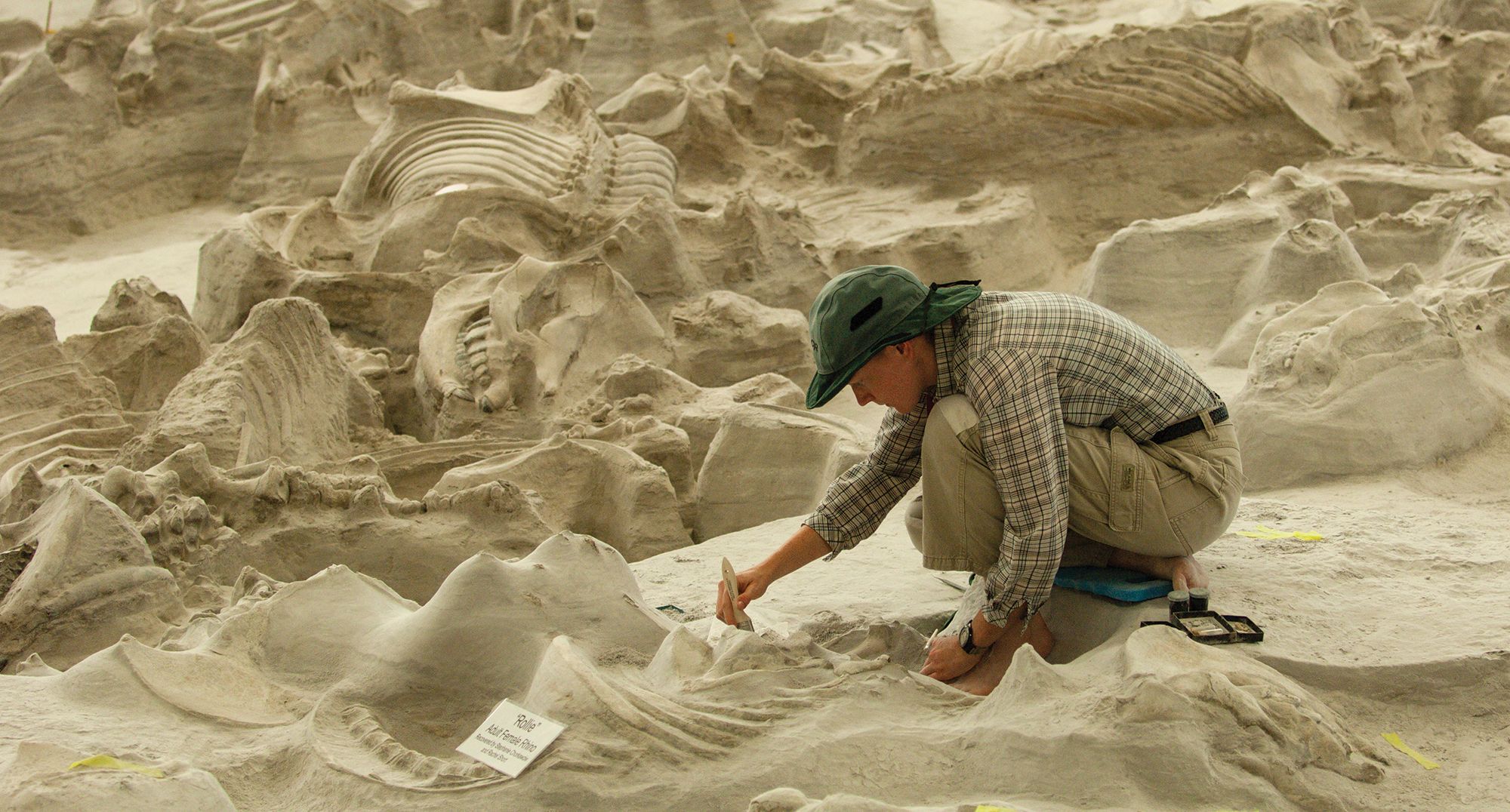 From Waterhole to Rhino Barn 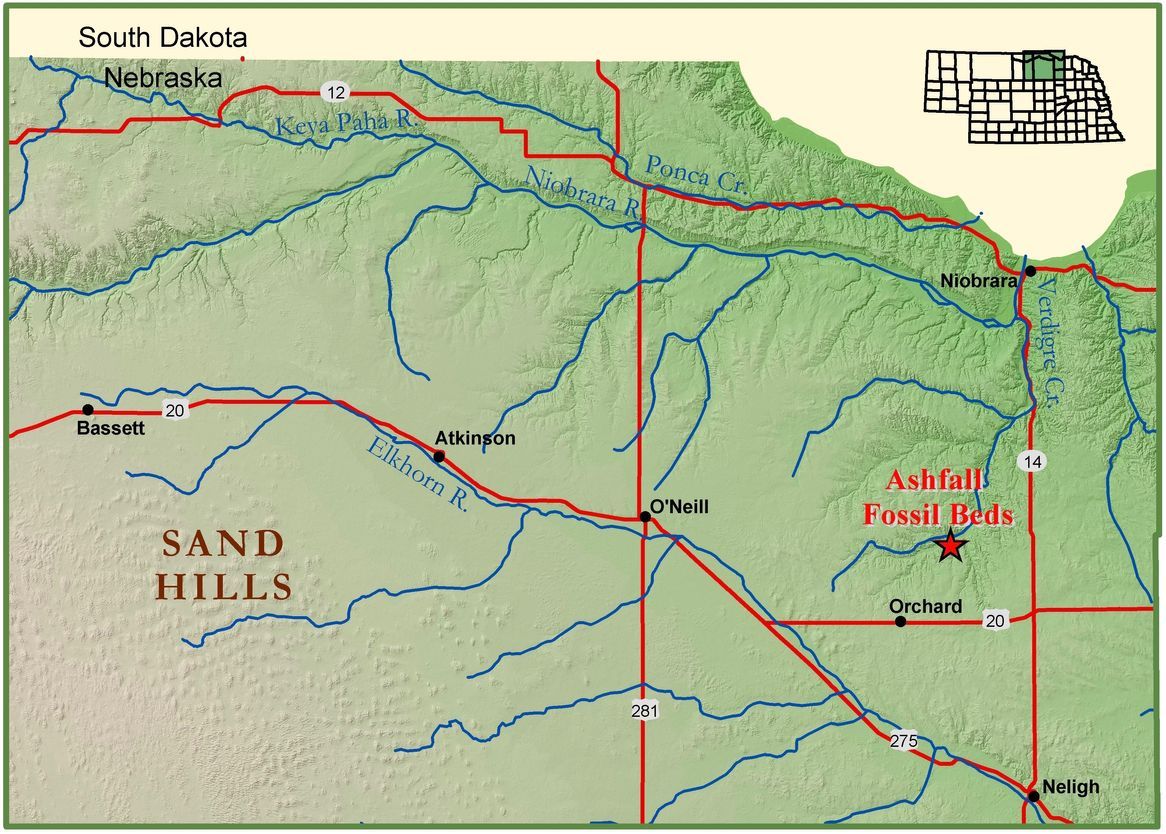 A drive across northeast Nebraska on U.S. Highway 20 is pretty much what one might expect in the rural areas of the nation’s heartland. The countryside consists of fields of corn and soybeans, and patches of small grains and alfalfa, interspersed with rolling pasture and grazing cattle.  There is certainly nothing to indicate to the traveler that twelve million years prior he would have been journeying through a vast North American savanna, teeming with exotic wildlife.  It takes some imagination to visualize herds of rhinos, delicate horses, camels and elephants grazing great seas of grass or browsing on shrubby trees where row crops now stand.  Perhaps it seems even more unlikely that there could be much evidence of this ancient ecosystem anywhere in soil that has been tilled or pastured for over a century.  But there is evidence – and it is abundant and graphic.

Located one hundred miles west of Sioux City, Iowa, and seven miles north of Highway 20 in northwest Antelope County, Nebraska, the Ashfall Fossil Beds State Historical Park has proof-positive that the subtropical savanna existed.  Complete, articulated skeletons of several kinds of prehistoric mammals lay entombed there in a thick bed of volcanic ash. In all, over two hundred complete, or nearly complete skeletons have been exposed with the possibility of many more as excavation continues.  The Ashfall site rests on a hill near a tributary of the Verdigre Creek, which flows into the Niobrara River thirty miles to the northeast.  This river system, running the length of Northern Nebraska, has been abundant in fossil mammal remains since the 1860’s when paleontologists began collecting specimens in the area.  The Ashfall site, however, remained unknown until 1971 when paleontologist Mike Voorhies noticed a thick layer of volcanic ash exposed by recent rainfall, located high on the side of a steep ravine.  Closer investigation revealed an intact skull and dentary of a baby rhinoceros eroding out of the ash. Careful excavation yielded the entire rhino skeleton – and several more; a phenomenon virtually unheard of.  With funding from the National Geographic Society, Dr. Voorhies was able to direct a major excavation of the site during the summers of 1978-79 and the results were astounding, with literally dozens of complete skeletons of rhinos, horses, camels and birds unearthed. 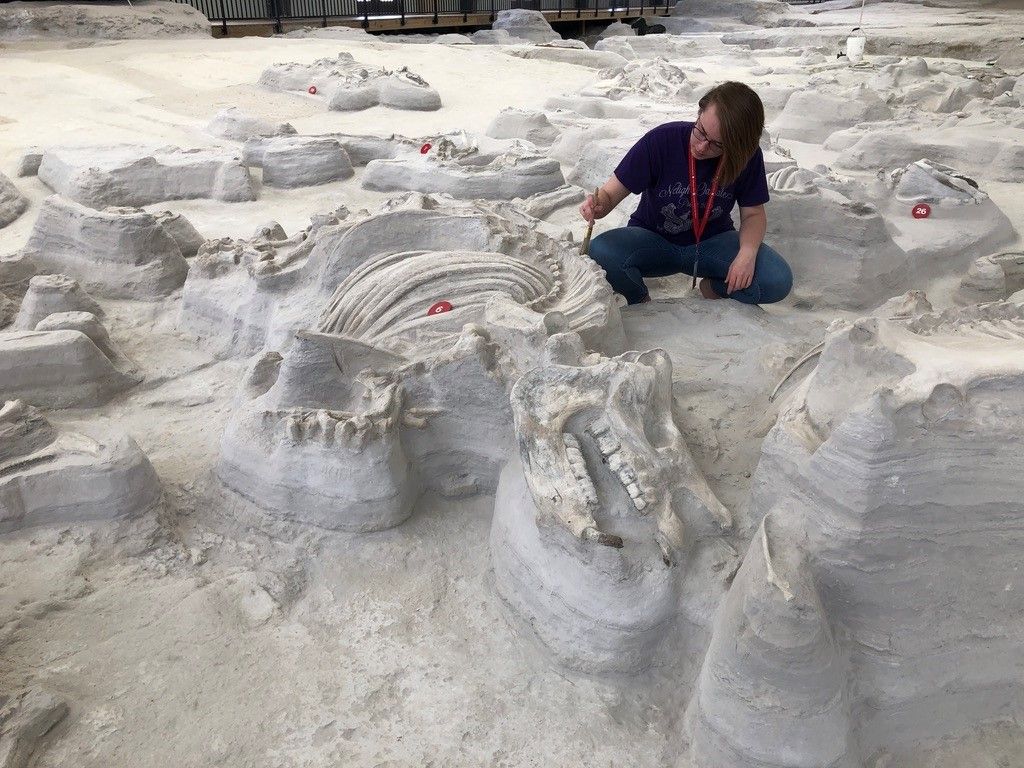 The most abundant skeletons at the Ashfall site, with over one hundred excavated to date, are of Teleoceras major, a short, stocky rhino with stout legs and a large barrel-like mid-section.  With so many skeletons available from one site, it is possible to do a population analysis.  Much about behavior and ecology that may not be evident in single animals can be determined from population studies.  The population study at Ashfall suggests that the rhinos probably formed harems.  There is a distinct absence of any number of young adult males and there is only one mature adult male for every five adult females.  Numerous skeletons of young calves have also been found, many of them nestled next to adult females - almost certainly their mothers. The calves are generally of the same age, indicating a definite calving period.  Like modern hippos, these animals probably spent time wallowing in waterholes and they were grazers, with large, high-crowned teeth designed for a diet of grass.  Fossil grass seeds are often found lodged between the teeth in the extinct rhino skulls.  Close study of the fossil seeds reveals the grasses that grew on the ancient savanna were subtropical species, much like those currently found in Central America – an indication that the Great Plains’ climate was most likely subtropical at the time.

Supporting this climatic evidence is the presence of fossil tortoises at the site.  These large land reptiles cannot survive in temperatures that dip below the freezing mark.  Giant tortoise fossils are reliable evidence that the climate in Nebraska was warmer twelve million years ago than it is now.  There is also evidence that the climate was drying out.  Nebraska fossils from the late Miocene indicate woodland environments were giving way to grasslands, and the numerous horse skeletons at Ashfall are an excellent example.  Some Ashfall species show varying degrees of tridactyl stance (three-toedness) in one population.  This is evidence that three-toed species, at home in the woodlands, began to move onto the open grassland to take advantage of the availability of new niches.  The harder ground of the open grassland reduced the usefulness of the side toes, which provided extra traction on the softer forest floors, and the side toes began to reduce and disappear altogether.  The horses at the Ashfall site clearly demonstrate evolution in action through the variances in their toes.  It would not be possible to determine these changes as easily without the number of skeletons available for study at the site or the excellent condition of the delicate side toes, which are rarely preserved.  Due to a relatively quick burial, however, complete preservation of skeletal remains is the rule rather than the exception at the Ashfall site.  The vast number of skeletons and the quality of preservation at the Ashfall site are a vertebrate paleontologist’s dream. 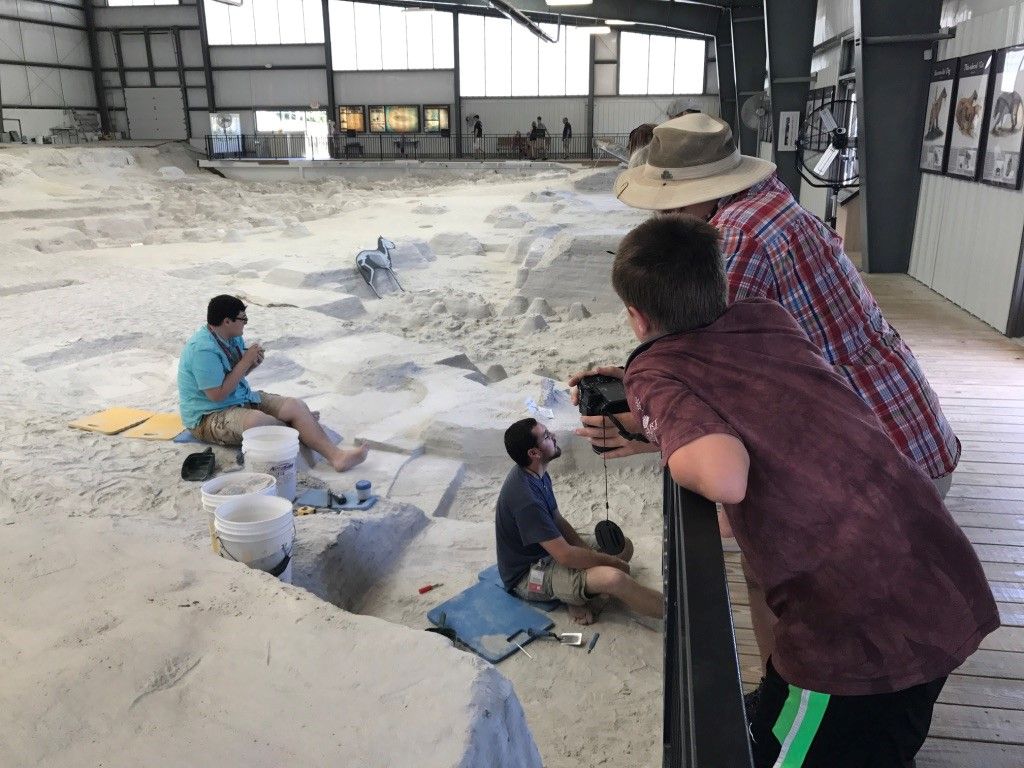 Research at the site has led geologists to believe that this mass graveyard is the result of an enormous volcanic eruption that occurred 12 million years ago in what is now southwestern Idaho, nearly 900 miles due west of the Ashfall Fossil Beds.  Chemical analysis of the ash has determined its origin to be a massive volcanic caldera in the Bruneau-Jarbidge area – which produced an eruption 1,000 times larger than the 1980 Mount St. Helens blast.  The fine volcanic ash from an eruption of such magnitude would have been deposited hundreds of miles from the volcano. The prevailing westerly winds would have carried the ash eastward, blanketing a huge area of the Great Plains.  The ash and other sediments from much of the last 14 million years are still intact across most of northern Nebraska.  Located within the Ash Hollow Formation, there are exposures of the ash layer in various locations along a 250-mile stretch of the state.  The ash layer is approximately a foot thick throughout.  At the Ashfall site, however, it is 8 to 10 feet thick.  Research has determined that the site was the location of a watering hole, basically a large depression on the landscape that would retain water during the wet season and dry out during dry spells, much like waterholes dotted across the savannas of Africa today.  Fossils of pond turtles, remains of reed-like plant stems, and diatoms within the ash are evidence of water, but the lack of fish fossils and the absence of channeling in the strata indicate something less permanent than a lake or stream-fed pond.  Nevertheless, the watering hole would have been a source of drinking water for local animals, as well as a place to wallow or bathe.

As thick clouds of the volcanic dust drifted in and settled on the landscape the animal community was devastated.  The ash, which consists of tiny shards of glass, is extremely abrasive and dangerous when airborne in large quantities.  Small animals, especially birds, would have succumbed almost immediately as the ash storm occurred.  Larger animals would have survived the initial ashfall, but then encountered a landscape covered with a thick layer of fine, powdery, abrasive dust that buried their food supply and became airborne with every step or even the slightest of breezes.  There was no escape and the horses, camels and finally the large rhinos died of a slow suffocation as their lungs filled with volcanic ash in the days and weeks that followed.  It seems likely that the animals came to the watering hole for some comfort, to lay in the coolness of whatever water was present as they became ill and feverish.  As they perished, the constant winds across the open savanna caused the ash to drift, filling the waterhole where the animals lay, little by little until their carcasses were completely covered with a thick, dense layer of volcanic ash.  Skeletons were exquisitely preserved in the round as carcasses rotted and ash took the place of muscle and organs.  Young and old alike, skeletons of rhinos, horses, camels, deer, and birds were preserved in the time and place of their death. 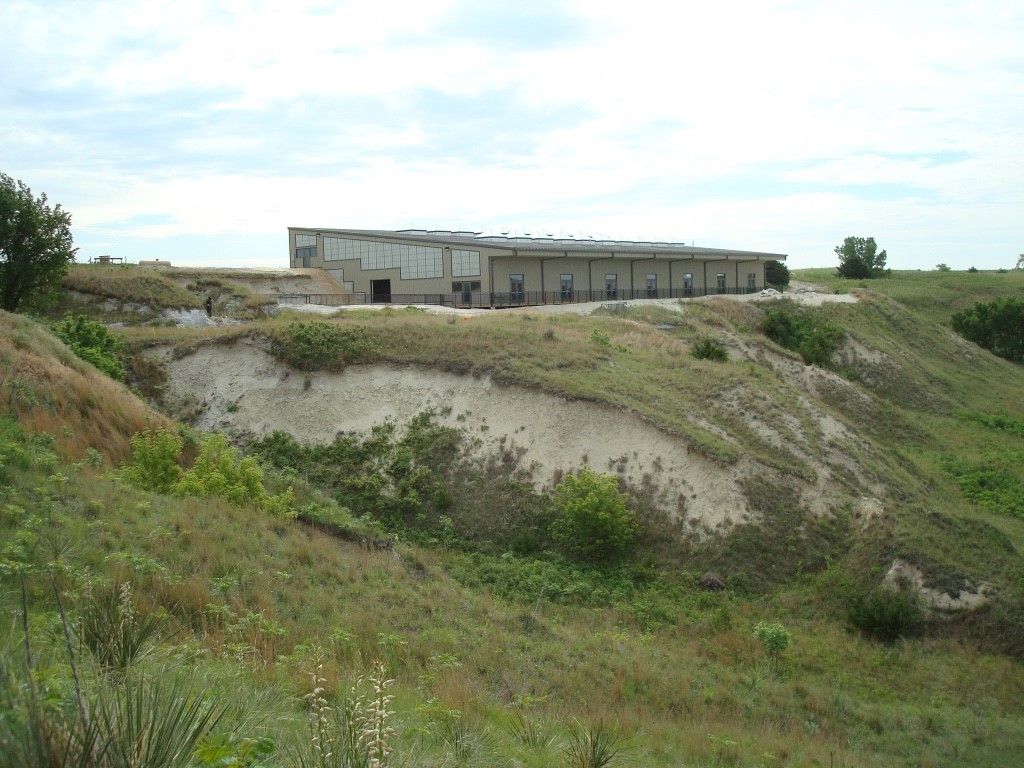 The Rhino Barn protects the fossil bed from the elements.

In 1991, after twenty years of research, the Ashfall site was opened as a state historical park for the benefit of public education and enjoyment.  A structure, aptly named the Rhino Barn, was built over a portion of the fossil bed where paleontologists have excavated several skeletons over the past 12 years.  Left in-situ, the skeletons are on display exactly as found, a snapshot in time, that visitors can stand near and study.  Displays and exhibits in the Rhino Barn, Visitor Center and along trails aid in the interpretation of the site, and park employees are available to answer questions.  Ashfall is an active fossil site with areas yet to be excavated and research to continue as funds allow.  There is anticipation about what the next discovery may be.  While much has been revealed at the Ashfall site, there are still many mysteries that remain.  What about the elephants that would have been living at that time?  What happened to the carnivores – saber cats and bone-crushing dogs that inhabited the area?  Did they find a means of survival or are they waiting to be discovered in some unexcavated area of the fossil bed?  What new species of plant or animal might yet lay buried in the ash that took their life but preserved their death?