Ashfall Fossil Beds is a working research site that is unique and invaluable to science. 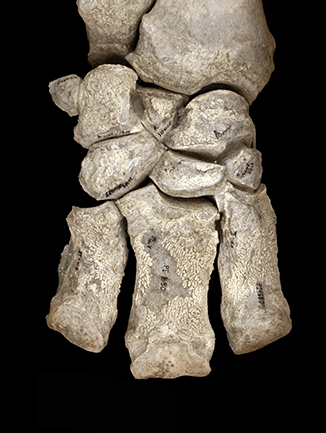 Rhino foot bones from the volcanic ashbed. Note the whitish, bumpy bone growth on the toe bones. This is the abnormal, pathologic bone growth that appears to be associated with extensive lung damage from hypertrophic osteopathy.

What clues did researchers discover that provided a window into what happened at the fossil site so long ago?

It is apparent that the birds died very shortly after the ash dust began to fall from the sky since the bird skeletons are located in the lowest (basal) layers of the ashbed. As the ash accumulated on the sandy terrain, it may have taken only hours for the cranes, hawks and vultures to die. But the story seems quite different for the larger mammals. Many bones of the camels, horses, and rhinos have patches of rough, frothy bone growth on the surface of the normal bone. The pattern of accumulation of abnormal bone is associated with lung damage first described by French pathologist Pierre Marie and his colleague Eugen von Bamberger in 1890. Also known as Marie’s Disease, or Bamberger-Marie Disease, the currently accepted technical term for the malady is hypertrophic osteopathy. It has been documented in humans and a variety of domesticated species. The abnormal bone growth is the secondary result of various organ diseases, but occurs frequently with lung-damaging diseases including tuberculosis and pneumonia, as well as tumors and abscesses. Symptoms begin with soft tissue swelling of the feet, fever, cough, and lameness. Left untreated, the thick pathologic bone growth develops on the limb bones and may spread to other parts of the skeleton.

There was no place for the local wildlife to escape the dense clouds of volcanic ash, or the inevitable inhalation of dangerous amounts of the ash when the camels, horses and rhinos were grazing—or attempting to graze on the glass-dust covered landscape. The rhinos lived longer than the smaller-sized species such as the horses and camels, and the animals lingered for weeks before succumbing to the effects of the volcanic ash.

For information and reservations